A Brief History of The Gypsy Palace

We are still not certain of exactly when Gypsy Palace was actually built, though it seems likely that it was first used as a gypsy dwelling in the 17th century. However we do know that Queen Esther Faa Blythe, perhaps the most famous Gypsy monarch of all, took up residence in the Gypsy Palace on November 16th 1861. In August 1866, she was visited by George Burrow, a writer and acknowledged Romany expert and Gypsy Palace was described as ‘a single storey, whitewashed thatched cottage with ivy covered walls. The single room was kept neat and tidy and was relatively well furnished with two beds, in recesses on either side of the fireplace, a chest of drawers, a clock, pictures and a cat’. Visitors -who came from all over the world to visit Queen Esther – also claim to have seen two large swords hanging from the ceiling; one was the royal ceremonial gypsy sword and Queen Esther claimed that the other was taken as a souvenir from the Battle of Flodden Field in 1513.

After Queen Esther’s death in 1883, the Gypsy Palace was renovated by the local wool manufacturer and owner of much of the village, Peter Govanlock. It is probable that the renovation included the addition of the porch with its unusual arched window and the replacement of the original thatched roof with a slate one.

Queen Esther’s son, Charles Faa Blythe (shown below) continued to live in the Palace though 15 years were to pass before his coronation as the new Gypsy King. The coronation took place on May 30th 1898 and was a huge event with over 10,000 people descending on Kirk Yetholm. King Charles II, as he was known, continued to live in the Gypsy Palace until his death just four years later. 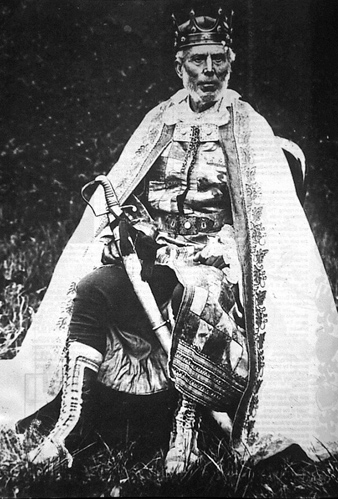 King Charles’ wife continued to live here though at present we have little idea of who exactly owned Gypsy Palace over the next 60 years. We do know that a Mr & Mrs Cunningham from West Sussex bought the property in the early 1960’s with the intention of using it as a holiday home. Bizarrely, they decided to paint the Palace pink as they felt that pink represented their love for each other. Unfortunately Mr Cunningham died prematurely shortly afterwards; however his wife decided she had fallen in love with the Palace and moved there permanently and there she remained until her death in 1999 aged 95. By this time, Gypsy Palace was in some considerable state of disrepair and extensive renovations were carried out resulting in the Gypsy Palace of today.
Next
Previous